The sacred places on earth hold ancient wisdom of our ancestors

Energy is everywhere, but there are energy flows that hold great constructive power and "sacred places on earth” appear where such flows Intersect. People say that the presence of God is greater In such places than anywhere else in the world and if there are no human beings around places of power, one can almost feel God.

BAIKAL, ALTAI, KAZAKHSTAN...we like to travel and explore the world. Sometimes, we feel as if an unseen power is pulling us towards a place, we think about it night and day, and when we get there, we feel like we are home. It's different with places of power. Here, a person not only feels comfortable, he feels a presence of divine power that gives warmth, love and protection, as if he were in a womb. The person feels cleansed and changed and is never the same again. By going to sacred places on earth on his birthday, a person has a chance to change his entire life and destiny. There are several important days in the lives of each one of us, but our birthday is the most special of all.

"Words cannot describe what you see and feel in such a place. You will understand for yourself when you touch the entire Universe and feel true love, energy and freedom inside you. Most of all, when you feel God!" Says Claudia Serdad from Mexico about her trip to lake Baikal in August of 2014.

How to behave at the sacred places on earth

It is said that it's dangerous to dream or wish for something in the sacred places on earth. But why? The reason is that everything is taken literally here and your wishes come true almost instantaneously! You may wonder why that could be so bad... There is nothing bad as long as your wish is stated correctly. For example, when Victoria went to Altai, she often complained that her phone was not working properly due to a bad reception. When she came back from her trip, throughout the year, people gave her cell phones as gifts. There is nothing bad in that, but it definitely could be better.

With whom to visit places of power?

It's best to visit sacred places on earth with a group of likeminded people and a wise guide, because it's easier to concentrate on what's important, keep a necessary emotion and clarity of mind together. Negative emotions that a person can feel when he's alone start the process of retribution that begins to function almost right away. Such a thing happened to Andre, a businessman from Columbia. He went on a trip to places of power in the Himalaya, wishing to gain power in order to conquer his competition, but because he was always thinking negatively, he could not cultivate the necessary thoughts to send out. As a result, he lost his business, money and competitors, as well. One has to pay instantaneously for any negative thought that appears in a place of power. The positive side of this is the fact that you will never wonder why something is happening to you.

SHAMANISM OR ALTAI? MAYBE BOTH?

If I were invited to a shamanism training session in Altai a few years ago I would feel very uncomfortable. Maybe from the word 'shamanism', maybe from the country itself, but most likely from both. You must agree that even in our liberal in its points of view world, we are still surrounded by prejudice and misunderstandings. But the world is not standing still, which is great news! When, several months ago, news came in that there's going to be a training on Shamanism in Altai, not many people expected the reaction that came as a result. There was a lot of interest and people were completely unafraid of the distance, cost of flight and the word 'shamanism'.

Humanity has long been fighting shamanism but it has always existed and will continue to exist.

Many Buddhists don't even imagine that Buddhism is the 'son' or even a 'grandson' of shamanism. Not just Buddhism! Christianity and Islam have not been left without traces of shamanism, as well, though I don't think that representatives of these religions will agree with that. However, when you unveil the most ancient knowledge of humanity that is shamanism, you will know that for yourself.

"I've been practicing shamanism for half a year now: I go to different tours and participate in various practices that are oriented towards unification with nature and communication with spirits. Why do I need all this? Because I wanted to change my life. Once, I found out about a shaman that was taking a group of people to Altai. I've never been there and didn't have anything to lose, because it seemed that my life reached a dead end. When I went on this journey, I didn't think that I will not only not lose anything, but will gain a new destiny. I can't talk about everything here, but I especially remember the practice of forming your future. For the first time, I realized that I can make my dream come true. I didn't even think about what my soul really strives for. This realization became a true source of inspiration for me. Shamans know how to use special rituals and practices to bring health, strength and success. I now know some of these rituals and no longer feel sick and lonely. I live a healthy lifestyle now and spend a lot of time outside. I've quit my job and do what I truly like. I have friends and my soul mate next to me!"

Natalia from Russia talks about traveling to Altai.

THE ROOTS OF SHAMANISM 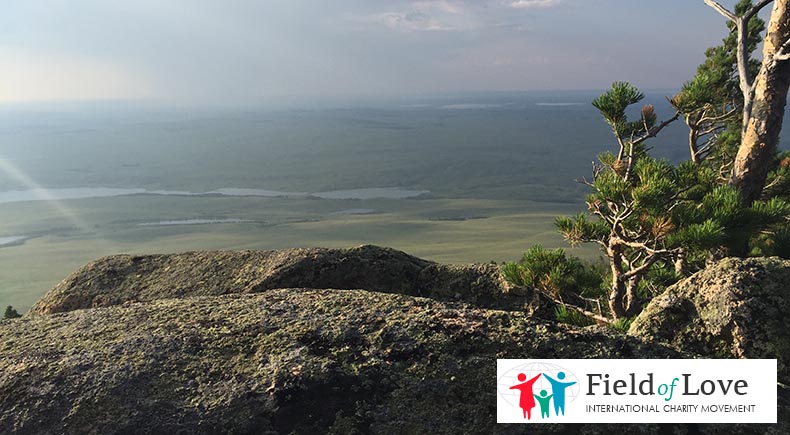 You will be surprised, but the purest and oldest manifestation of shamanism remains in traditions of Siberia. There are no drugs or black magic here and shamans are not wild nomads, but are modern people with great education. For many, meeting a Siberian shaman is a true revelation. I think, that is what happened to me. An educated person needs proof and explanations of everything, and Siberian shamans are capable of give both to you. Additionally, not many of us need to be told that a state of trans is natural to humans. When we are in a trans, all of abilities, talents and past experiences are available to us. Our capabilities have no limits! Today, drugs, alcohol and the musical genre of trans got a hold of the young people, but in shamanism, trans is reached through monotonous body movements, use of your own voice, playing the tambourine, and breathing techniques.

We are also inclined to believe in magic, especially when there is not much else to believe in. Often, shamanism becomes the last resort when someone's health or life needs to be saved. Possibly, the brightest examples of healing can be brought from this tradition. Each year, more and more people are trying to find the answers to their questions here. Even celebrities and politicians as shamans for advice, thought this is often hidden. Some people save their health, or the health of the ones they love; others, fix money problems; others, attract success and fame; yet others, are dreaming of conceiving a child...

Today, we can say with certainty that there is nothing more powerful than shamanism and its rituals even in our progressive 21st century.

"The business that I've been building for over 15 years was falling apart. I was threatened by my competitors and it looked like I was going to have to declare bankruptcy. A friend recommended that I go to the sacred places on earth, but I didn't want to leave my business. When I felt that my life was truly in danger, I bought a ticket, turned off my cell phone and just disappeared for two weeks. I almost fell off a cliff during the expedition, but was saved by my mates.

Later, I found out that my car was blown up at home. I went through a shamanistic cleansing ritual and felt as if a great weight was lifted off my shoulders. When I came back, I saw that my employees, whom I never trusted, united and pulled the company through the crisis and received a high paying order. My competitors as if lost interest to me. "

Shamanic journey to connect with your spirit and power!

Those who have been to a similar journey know that the beauties of nature are an obligatory part of shamanistic master classes and unification with nature and breathing in tact with it are the necessary conditions of any ritual. The shamanic expedition in Kazakhstan gives you a chance to find a common language with the spirit of water, hear the voice of the forest, catch your helper spirit and change your future! The pleasant bonus of such a trip is the fact that when you return home, you will be the master of your life! How? You need to come with us to find out!

"My excitement had no limit! I can't describe it! Each day was different and much like unique pearls, these days combined into a beautiful necklace. The seminar's program thought through to perfection. There was everything one may think of: sightseeing, excursions, horseback riding and hot air balloon rides, dances, fun and much, much more. I remember most the energy practices and exercises and visiting special places. I didn't just rest and got to know a new country, I changed my perception of life, something that was noted not just by me, but by people around me. During the seminars I was given a special object of power a bracelet that I wear all the time, which fills my life with excitement, confidence and happiness. I often note that my friends admire me. '

Dear friends, you will be very impressed with your "Place of Power" journey, but the main thing is that you will change your life! You will be healed from illnesses, remove any obstacles on your way to happiness and fix your financial situation. An unforgettable journey in the company of unique people will remain in your heart forever. And we will be happy if after your trip you share your experience with us and our readers.