Domestic violence: why should we talk about it 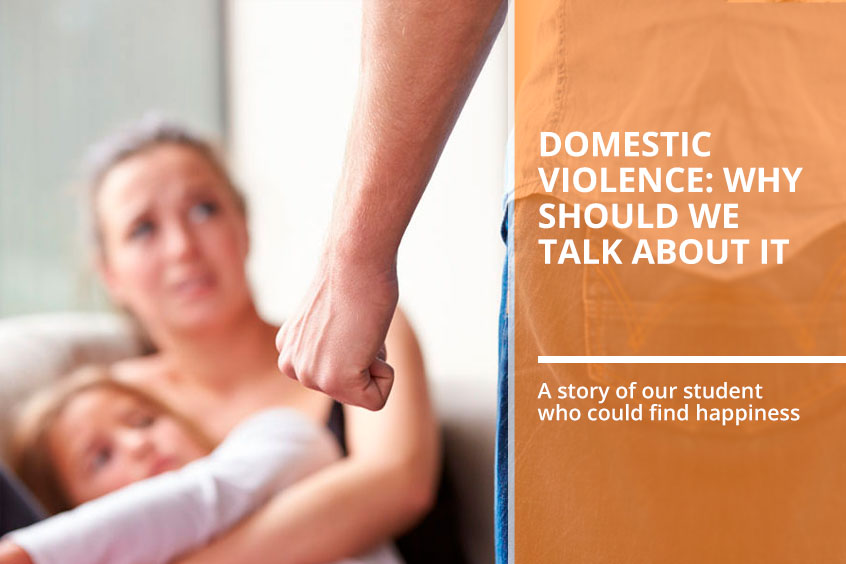 A story of our student who could find happiness

Our world can be hardly called safe. Armed conflicts, accidents and natural disasters. However, our closest people – our partners - very often pose the biggest risk to us. Victims seldom go to police or ask for help. They tolerate slaughtering or psychological humiliation for years. Is it possible to stop domestic violence? It is! In this article we will tell you how to do it.

The prince who turned into a monster

Margaret applied makeup to her neck with a familiar gesture and took a hard breath. No, today she could not do with only cosmetics. I'll have to wrap my neck with a scarf. Yesterday, Greg was so furious that he tried to strangle her. She was lucky to have Helen back from the concert earlier. Her daughter had saved her life by coming home at the right moment. As if she felt her mom was in danger...

Greg... What happened to that charming young man she met 13 years ago at a friend's party? He seems to have been replaced after Helen was born.

For the first time her husband hit her when the baby turned one. Helen then was taking her first clumsy steps and, having made a mistake, hit against the step. Her daughter's loud cry... And Margaret remembers the next moment as in a fog.

Greg's rage-stricken face, a giant fist approaching her face too quickly, an outburst of pain and darkness...

She woke up at the hospital in the intensive care unit. The severe concussion and nasal bone displacement were treated for a long time. Margaret never told the doctors that it was domestic violence. She was lying something about falling down the stairs. Moreover, Greg was prostrating himself, filling the room with flowers, begging for forgiveness. And she forgave him.

And six months later, he beat her up for staying late at her friend’s. From that moment on, the beatings began to repeat at terrifying intervals. He could always find a reason. At first, Margaret was determined to leave her husband. But Greg threatened to take Helen through court action and prove that his wife was a unreliable mother. What scared her most was that neither the police nor her parents were able to help her.

One day, Margaret took a risk and called the police, complaining of domestic violence. But her husband, telling the police his version of what had happened, perverted the meaning of their quarrel in such a way that Margaret, desperately blushing, just did not know where to look with shame. After that, she wanted to go to her mother's house, but she didn't get the support she needed. Her mother persuaded Margaret not to piss off her husband and not to provoke him. And if it comes to beatings, she will have to endure, it was her fault.

This endless nightmare lasted several years. Until one day a girlfriend from France came to visit us. Dora, seeing the bruises, was terrified. And thanks to her Margaret and Helen were travelling along the sunny Provence in the direction of Nice week later.

They lived three happy years in Nice. Margaret cheered up a little, forgot about domestic violence, and opened her own small cushion-making firm. Suddenly, one day, Greg showed up at her place. He somehow persuaded Margaret's mother to give away the location of his wife and daughter.

Greg wouldn't even let them pack. He pushed them into the car and took them back to London. 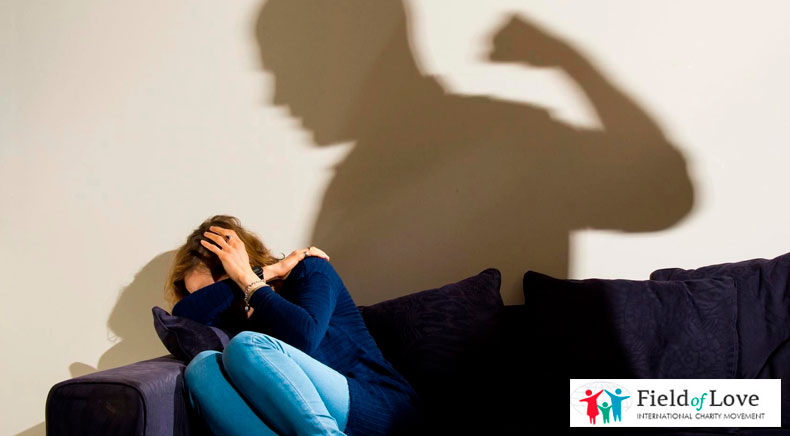 No one would help...

Margaret never tried to run away again. And two years later, little Robert was born, and Greg temporarily suspended his beatings. But when the son grew up, it all started again.

Greg made his wife believe that she had no choice. He clung to her like a vampire and didn't plan on letting go of his victim. And she had no power to fight.

Besides, Margaret was afraid that her daughter would have problems at school if they find out was going on at home.

Why she thought so... now she can't explain it.

Life in constant fear broke Margaret. In public, she looked like a well-groomed woman, a successful professional and happy wife and mother. A top position, a good house surrounded by the green trees, high income, healthy children. And there were disgusting marks of beatings under a layer of make-up foundation, husband monster, domestic violence and a black hole in the shower ...

Margaret's story, unfortunately, is not unique. There is domestic violence in all countries, regardless of income, education, religion or nationality. Statistically, one in five women in the world suffers from domestic violence. One in five! These are terrible figures.

It is good if it has not affected you personally. But take a closer look at your colleagues or girlfriends. Doesn't it seem to you that some of them apply too much makeup? Or wear long-sleeved clothes and scarves even during the hottest day? Or sunglasses when it rains outside?

OK, maybe your friend or colleague is just eccentric. Or maybe she's hiding markings of beating...

A huge number of women have recently come to us at the Field of Love with this problem. They have nowhere else to go. The police prefer not to interfere in the family quarrels, relatives close their eyes, and the victim is ashamed to confess to her colleagues.

And a woman feels that she is left alone with her problem which can not be solved in any way. But to change the situation, a woman, first of all, must believe that it is possible. She must believe in herself. In the fact that she is worthy to be happy and loved. She has to believe that domestic violence has not broken her.

None of us is born to be a victim. Each of us has a different predestination. To fulfill it, we need to get rid of the aggressor and start a new happy life. And it is possible! Below you will find 5 ways to help the victim stop being afraid of her tormentor.

How to stop domestic violence: 6 methods

It's the hardest thing to decide to break off a relationship with a tormentor and say to yourself:  "That's enough! I will no longer tolerate mockery! I deserve a better life.» These seem to very simple words, but victims rarely say them. Even in their head. Because it's scary. Because there is a psychological dependence on the tormentor. Because there is no power to fight. One can't cope with it alone. One needs energy and support. Keep reading to find out where to get them.

The easiest thing you can do when you find yourself in a situation like this is to find people who will support you. Where? Of course, at our group classes in your city. It is a mini club where there is a friendly atmosphere of mutual respect and love. Knowing that you are not alone, and you can rely on those who understand and support you, will be one of the main incentives to change your destiny as soon as possible.

The second very important aspect is to conduct independent practices aimed at developing self-confidence. Only by raising your self-esteem will you be able to stop being a victim and understand that domestic violence is not the life you need. Where to look for these practices? At our seminars and group sessions. There are many of them. These are the Complex of Self-reliance, the Heaven - Earth exercise, the Power of Cleopatra exercise, and many others.

We recommend starting the day with I am worthy practice!

Go to the mirror, look into your eyes and say: "I deserve to be happy! I deserve to be loved! I deserve to be brave!». It is important to raise the energy level and dance actively for 5-10 minutes when there is no one in the room before you come to the mirror. It is best to wear the talisman you got at our seminar that connects you to the power of the great woman: Cleopatra, Amazon, etc. If you need help, you can order this practice in audio format or attend a group session.

Method No. 4: Increase the energy level

Why do women suffering from domestic violence rarely fight the violator? Because they have no power. Constant humiliation - both physical and psychological - tires out, sucks all the energy out of the victim. This energy needs to be regained. How? During a retreat to the Place of Power. It is they who give the greatest energy to a person, and guide tutors help accepting it through special rituals and practices.

Method No. 5: Find protection from the Higher Forces

Victims of domestic violence believe that no one can help them. But even if your relatives and the police have turned their backs on you, you can turn to the Higher Forces for protection. The easiest and most effective way is to get a special protective talisman or amulet. You can do this at our classes or at a personal consultation with a tutor. Our tutors will charge the talisman with great energy, which will support you and give you power.

And, of course, you need to go through an individual session with the tutor. They will perform a special ritual, which will protect your karma, destroy all incorrect energy connections and break sans-contact with a man who is torturing you. All this will allow you start a new, happy life. 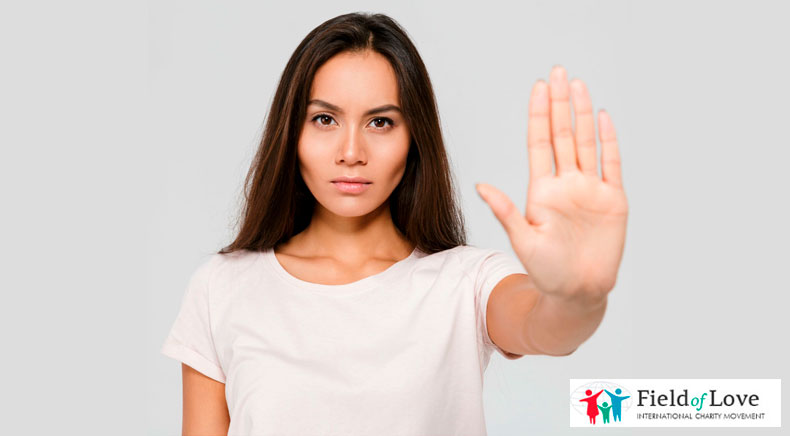 A story with a happy end

Today, a new woman arrived at the Center for Assistance to Women Victims of Domestic Violence. Kate. Margaret needed to take only one look to see what was going on in this woman's family. A lot of toner, dark glasses, a scarf...

Margaret has seen this picture hundreds of times for the 5 years that she has been running the Center. And each time the newcomer began by denying the problem.

It takes a lot of time, energy and love, the main thing is love, to make the victim talk.

Give her hope, power, show that the woman is not alone.

She once found all this at the Field of Love classes. Tutors, other students and special practices were helping her. Life with Greg is a thing of the past. Now she has a beautiful, caring person next to her, and the work of life that makes her happy. Helping others is why she came to this world!

Yes, it is not easy. But Margaret knows how to start a conversation with any new visitor of the Center. She smiles and approaches Kate. "Do you know I don’t have in my wardrobe? - she asks a woman. – Scarves! Not one! I once had several dozen of them. But now I just don't need them. And you won't need them because..."

Let's stop domestic violence together! Tell your friends about the Field of Love, bring them to our classes, send them a link to this article. Even the smallest step towards a victim of domestic violence can change her life! Help people, and the universe will help you!